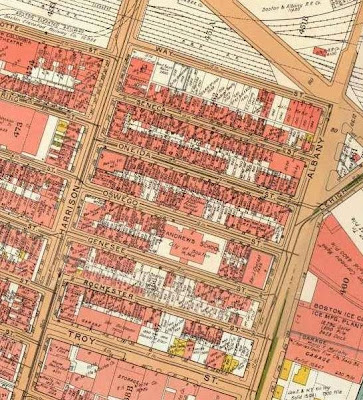 
The New York streets, so-called, were at the northeast corner of Boston's South End. From north to south, and running between Harrison avenue and Albany street, they were Seneca, Oneida, Oswego, Genesee, Rochester and Troy streets. They were laid out on filled land (formerly wharves jutting into South Bay), and named to honor the connection of the Boston and Worcester Railroad line to Albany in 1842. This district may have been specifically planned as residential housing for the arriving Irish immigrants, who were already settling in the North End and just to the north on Fort Hill.

So what happened to the New York streets? Urban renewal happened to them. The entire block of streets was removed, and became the home of the Boston Herald Traveler plant. This was actually the first urban renewal project in Boston, predating the destruction of the West End. Of course, 'urban renewal' was the term used, but slum clearance was the intention. The neighborhood was an integrated multi-ethnic district of working poor/working class people who had no one at City Hall to speak for them, and such populations had not yet learned to speak for themselves. The city wanted to keep the Herald in Boston, so it found room for them on the backs of a population who couldn't fight back. Somewhere in Boston, there should be a Hall of Shame for the people who did these things.
Posted by Mark B. at 10:23 AM 7 comments 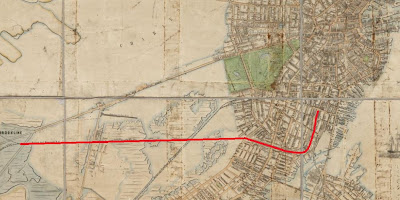 Route of Boston and Worcester Railroad into Boston, 1852 (BPL). 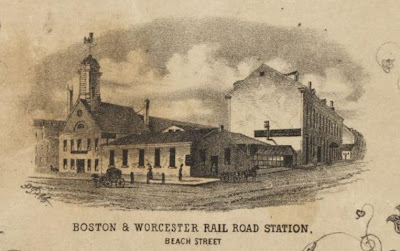 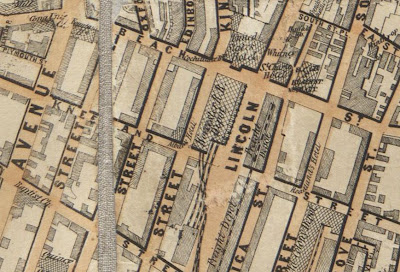 The Boston and Albany railroad line started as the Boston and Worcester in 1932. The line approached Boston through Brookline, and cut across the Back Bay on a trestle bridge, intersecting the Boston and Providence line at one point (the present site of the Back Bay train station). It continued northeast towards the harbor, turning north to reach the terminal on Beach street. 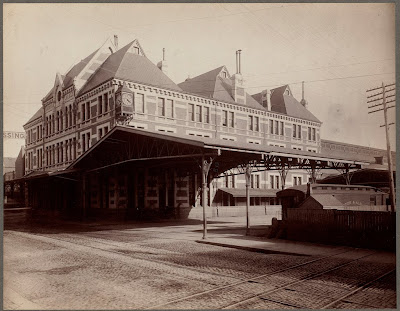 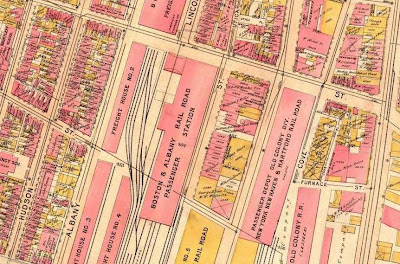 Boston and Albany station, south side of Kneeland street, 1895. The railroad tracks noted in the photo above crossed Kneeland street to reach a freight house that sat on the site of the old Boston and Worcester passenger station shown in the top photo and associated map.


After two consolidating mergers of western lines, which were common during the early rail-building era, the company became the Boston and Albany in 1870. According to maps, the Boston and Worcester terminal at Beach street was still being used, but by 1883 the new Boston and Albany passenger station shown above is in place, and the old terminal across Kneeland street is being used as a freight terminal. In 1899, the new South Station would consolidate rail terminals in the southeast part of Boston proper and replace the stand-alone Boston and Albany terminal.
Posted by Mark B. at 5:38 AM 4 comments 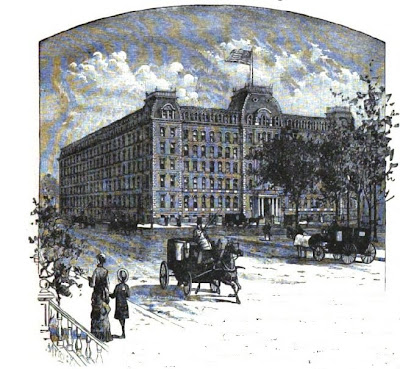 From the book Illustrated Boston, 1886. 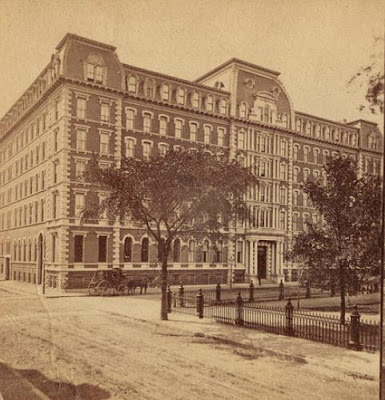 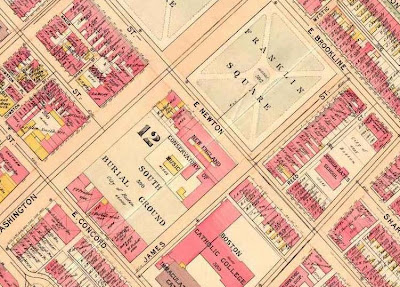 
The New England Conservatory of Music was founded in 1867, and began in rooms above the Music Hall in downtown Boston. In 1870, they found their own home in the former St James Hotel on Franklin square in the South End. At the time, some people imagined that the South End would match the Back Bay as a home for Boston's elite. Instead, after a short time it became home to lodging houses and immigrant populations.

As with the Back Bay, the South End was home to many institutions that later moved for more space or a more suitable neighborhood. Eban Jordan, son of Jordan Marsh and Boston Globe founder of the same name, donated land on Huntington avenue for a new building, and in 1902, the school moved to join the Boston Symphony, the Boston Opera Hall and the Museum of Fine Arts on Boston's premier arts avenue.
Posted by Mark B. at 11:40 AM 1 comments 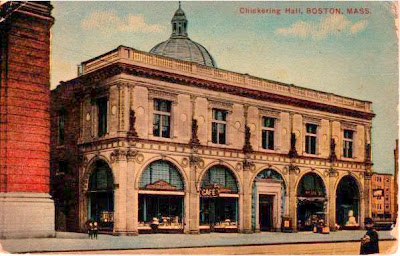 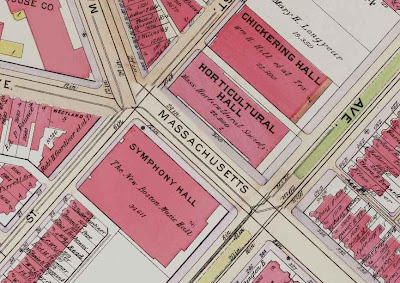 
Chickering was a leading name in American piano manufacturing for much of the 19th Century. Jonas Chickering founded the first company under that name in 1823. The company evolved through partnerships and different names until it became Chickering and Sons in 1853. The Washington street factory burned in 1852, and the company moved to Tremont street in the South End, where the building still stands. Chickering was just one among many piano and organ manufacturers in 18th Century Boston, making the city a national leader in the field.

Chickering financed concert halls to show off their instruments, with one built in New York before the erection of another in Boston. Chickering Hall was built on Huntington avenue in 1901, beside Horticultural Hall and around the corner from Symphony Hall. However, the hall didn't retain the Chickering name for long, as the map below shows. 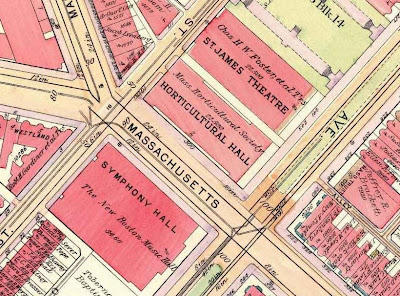 
The Chickering had become the St James by 1917 (above), which combined Vaudeville and film, and was renamed the Uptown by 1938, and remained a movie theater (below). The theater survived until 1968, when it was demolished for the expansion of the Christian Science campus. 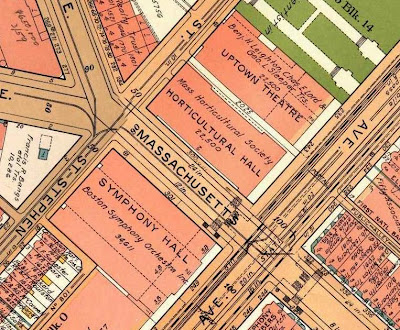 I was going to look at some of the classic cinemas of Boston's past, but there's really no point of doing so when there's an entire site dedicated to remembering old movie houses. Cinema Treasures is the Wikipedia of movie houses, filled with user-supplied information on movie theaters of the past and present. Included (to date) are 106 entries for Boston. You get everything from nostalgic memories of people who attended openings of The Sound of Music and Cleopatra to detailed histories from dedicated devotees, from architects to name changes and old photos. Even if you know nothing about Boston's cinema past, just browsing the list will provide fascinating stories.

The search page includes a City tab - enter Boston in to the search window and get the full list.

Cinema Treasures
Posted by Mark B. at 10:09 AM 1 comments