Following last week's entry, the story now changes. Bathing the entire body was not popular in Colonial times, but by the 1840s, and a dramatic increase in immigration, the need for public baths was advocated in major cities like Boston. By 1850, there were at least 12 privately owned public baths in Boston, but they would have been too expensive for the working class and poor. In her book , Washing the great unwashed: public baths in urban America 1840-1920, Marilyn T. Williams reports that in 1866, Boston opened five floating baths (like those of Braman), and one natural beach bathhouse, at L street in South Boston. The Bulletin of the Bureau of Labor, 1904, tells us that in their first month of service, the five floating baths saw 100,000 customers. In the next year, six new baths were opened, with four serving women exclusively. 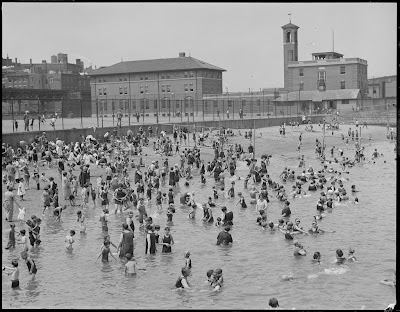 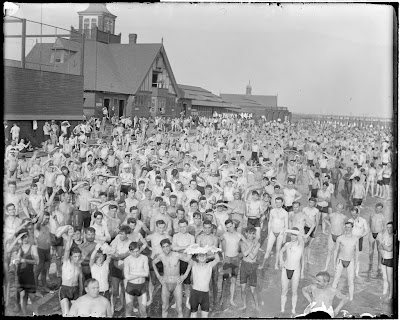 We skip to 1896, and a new mayor, Josiah Quincy. The existing floating baths and bathing beaches would be improved, and new landside buildings would be erected. The L street facility in South Boston was expanded for girls and women, and now had separate boy's, men's and women's sections. The North End park, the next most popular, opened in 1898. There were again separate facilities for men and women, and upwards of 5,000 bathers attended daily. The facility covered six acres, and contained hundreds of lockers and closets, a playground, and open air gymnasium, floating platforms and shade tents. 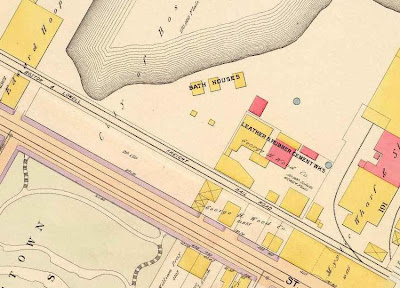 
East Boston had a beach and bath house at Wood Island park, which would later be lost to Logan Airport. Charlestown had a facility similar to East Boston on the Mystic river known as Dewey beach. Dorchester had two smaller facilities, at Commercial point and Savin hill. Even land-locked West Roxbury had a bath house. The Spring street beach, also called Havey beach, was on the Charles river where the V.F.W. parkway is now. All of these facilities were free. There was a charge of five cents for a men's bathing suit, and one cent for a towel, but bathers could bring their own.
There were twelve floating bridges, open from 6 A.M. to 10 P.M., from May 15 through September 15. Three baths were located in East Boston, four in Charlestown, three in Boston proper, and one in Brighton. Each served its local community, resulting in an ethnic segregation among the facilities. The two at the West Boston bridge served the African American community on the back of Beacon hill. The Craigie bridge bath house served the Jews of the West End, and the Warren bridge facility attracted both Jews and the Italians of the North End. And the Dover street bridge bath house attracted the Irish of the South End and South Boston.
The municipal bath movement had begun as a hygiene measure for the poor and working class crowded into the city. The poor and working class, however, seem to have taken to the facilities more as entertainment - swimming - than simply as bathing establishments. And so the city would shift from bath houses to swimming pools. At the same time, gymnasiums were built, in some cases combining the two facilities in one building. Two outdoor gymnasiums were laid out, at Wood Island park in East Boston and at Charlesbank. Harrison avenue in the South End and Tyler street in today's Chinatown saw gymnasiums fitted out, and ward rooms at Elmwood street in Roxbury were turned into a gym when not in use. 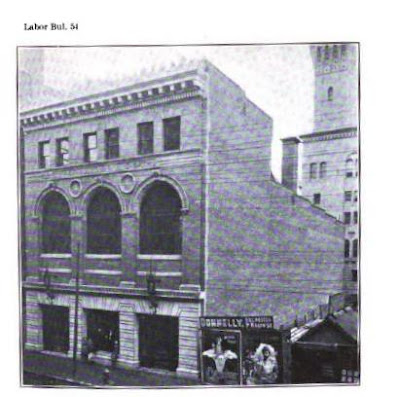 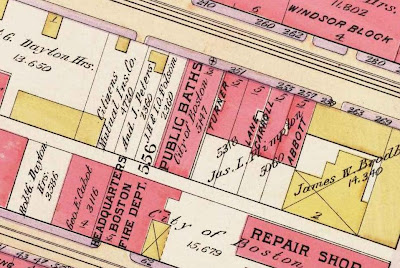 Dover street baths, South End, 1902.
A survey of 72,000 families in apartments in Boston revealed that only 25% had bathrooms, in some districts the number going down to one percent. The Dover street bath house in the South End was erected to serve the many poor and working class residents of the district. This was built for washing, rather than for swimming. 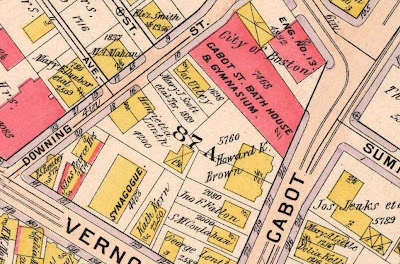 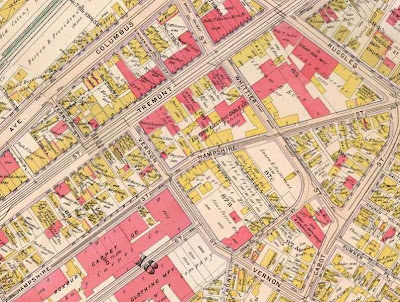 Cabot street bathhouse, 1906.
At Cabot street in Roxbury, a combination gymnasium, bath house and swimming pool was erected. There were classes for schoolgirls, mothers and working girls. 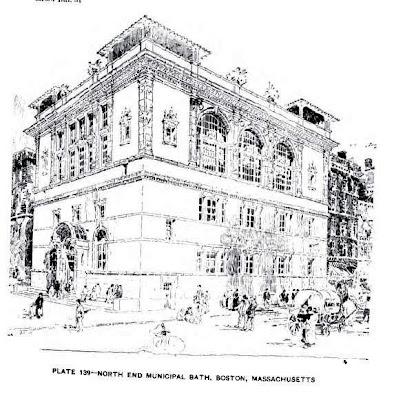 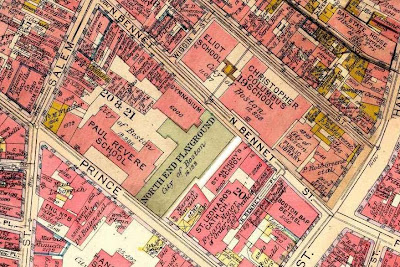 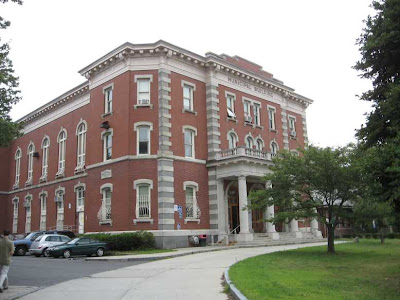 To end the story, I'll add a photo of my own of Jamaica Plain's Curtis Hall. The Curtis Hall municipal building was erected as the town hall of the short-lived town of West Roxbury, just in time for the ephemeral community to be annexed to Boston in 1874. In time a gymnasium and swimming pool would be added to the building. My memories of the 1960s include going to 'tank' to swim during the summer. For five cents, we got access to the pool for what I believe was half an hour. Boys and girls swam separately, the girls using the supplied and required gray bathing suits and the boys...swimming naked.
That's what I said - a room full of pre-adolescent boys gamboling about buck nekkid while lifeguards and facility workers looked on. Can you imagine that happening now? My father told me that it was the same when he swam at Curtis Hall in the 1930s. I can only imagine now that the boys' naked swimming was a hold-over from the time when bathing was favored over swimming. I know that we weren't allowed in without a towel and a bar of soap.
The Jamaica Plain Gazette recently announced that the refurbished Curtis Hall pool has re-opened. Hours and admission fees were discussed, but no mention was made whether boys should bring a bathing suit.

Boston Takes a Bath: Part I 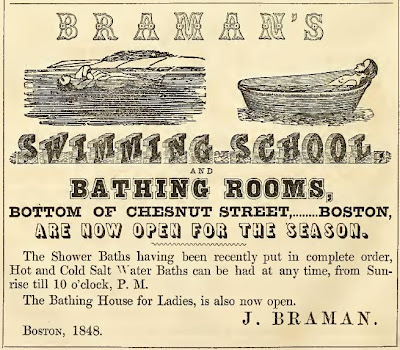 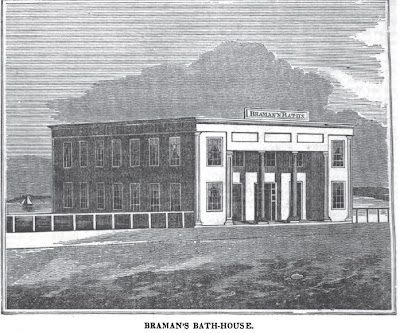 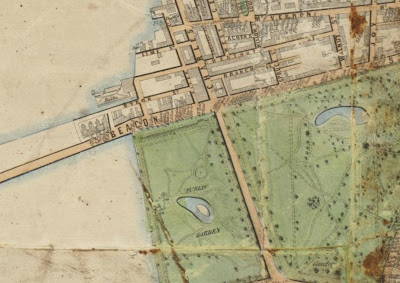 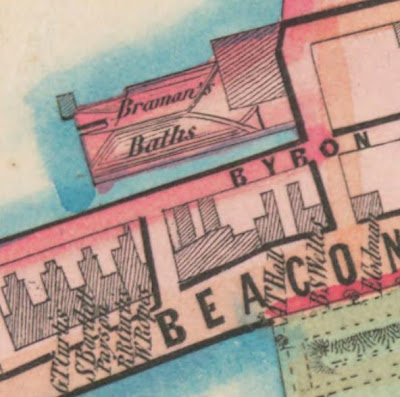 
I came to the topic of public baths when I found the book Washing the great unwashed: public baths in urban America 1840-1920, by Marilyn T. Williams. When I began investigating, I found the subject could be split into two sections - an early, 19th Century period of private baths, and a later turn of the century development of municipal facilities. I'll begin with the early era, and do a second post on the municipal baths next week.

The maps above show Braman's Baths, which opened in 1835, and sat on pilings in the Charles river near Beacon street and the new Public Garden. . At the time, that meant salt water. The building was two stories, 80x50 feet, with 50 bathing rooms and warm and cold water. The pool itself seems to have floated on the water. People took swimming lessons at Bramans, and we can imagine they cooled off in the summer's heat as well. In the fall, the bathing houses were towed up river and grounded for the winter.

One Year Of Boston As It Was 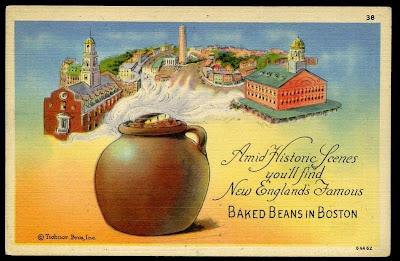 Congratulations to me for having kept this blog up for an entire year. The good thing about a history blog is that unlike contemporary news, the content doesn't get old - it already is old. I've already mined a lot of the easy pickings, so I suspect that entries will slow to a trickle soon. Still, the material will remain online as a resource for those interested.
Posted by Mark B. at 10:00 AM 8 comments 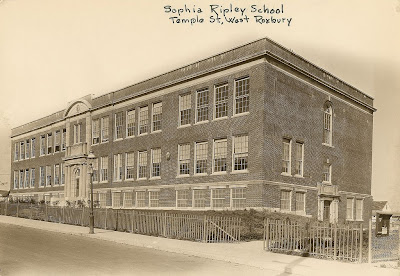 I'm doing something different today. An earlier entry featured bygone Boston high schools. This one looks at schools named after women. In each case, a local woman was chosen, and each woman was active in advocating for education in Boston. There was a lot of catching up to do, so as immigrant children filled the school system and new building were built, quite a few were named for women.
Born in 1803, Sophia Dana Ripley was from a prominent Boston family, and married George Ripley, the couple becoming involved in Transcendentalism and Brook Farm, where she ran the primary school. Sophia started life as a schoolteacher, attended Margaret Fuller's 'conversations,' but lost enthusiasm for the Fourier-styled social arrangements, and converted to Catholicism in 1846. 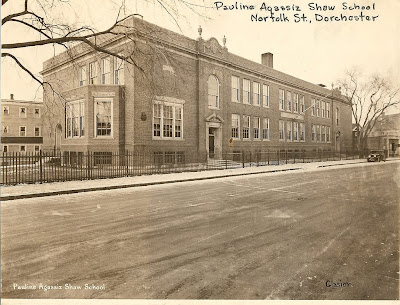 Pauline Agassiz was the daughter of Louis Agassiz, Swiss scientist and leading light at Harvard University. She married Qunicy Adams Shaw, who came from great wealth and managed to add to it with the Calumet and Hecla Mining Company. Pauline Agassiz Shaw spent her life in philanthropic endeavors, including bankrolling the first kindergartens in Boston, which she was able to get the city of Boston to take over. I've already written/transcribed a blog post on her at my Jamaica Plain blog - for more, please read here. 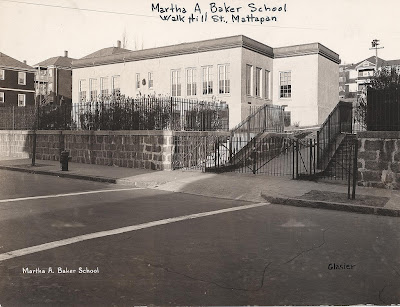 All I can find for Martha A. Baker is an army nurse who served during the Civil War. 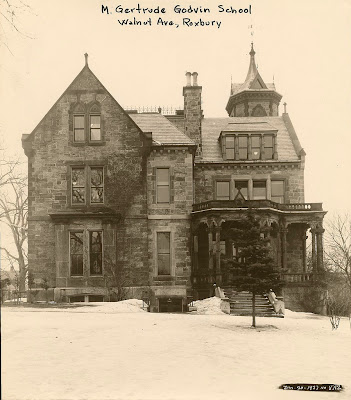 This remarkable building in Roxbury was built as a home called Abbotsford in 1872 for Aaron Davis Williams Jr.. Although I can't find the reference online now, I know that the property was taken over by the city and used as a school for wayward boys. M(ary) Gertrude Govind worked in the Boston school system, and I believe that she ran the school, although I need to get a reference for this. Elma Lewis took over the property and it is now the Museum of Afro-American Art. 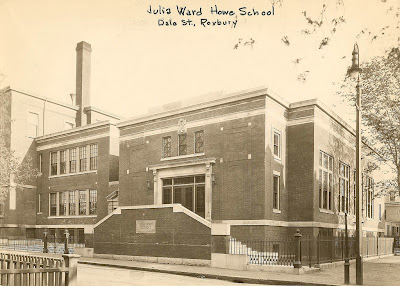 Julia Ward Howe should need no introduction - her Battle Hymn of the Republic is just one of her claims to fame. 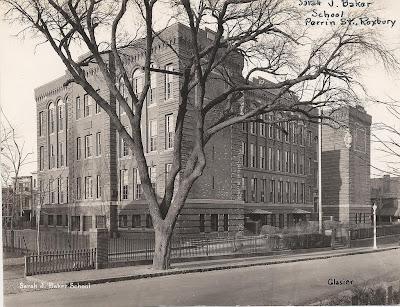 Sarah J. Baker was the principal of the Dillaway school for girls in Roxbury. 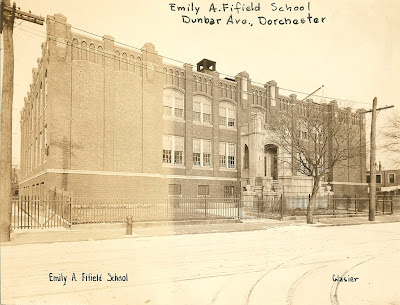 I find references in the Boston Globe archives to a Mrs Emily A. Fifield being active in the Boston schools between at least 1888 and 1896. She served on a committee for the school board in 1888. 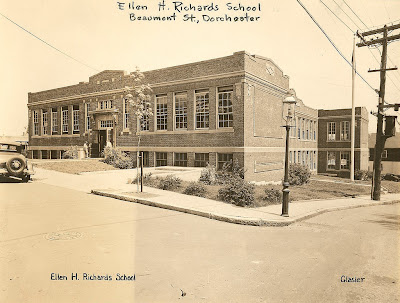 Ellen H. Swallow Richards was the first woman admitted to MIT, the first woman graduate and instructor, and a leading and pioneering environmental chemist of her day. She and her husband lived on Eliot street in Jamaica Plain, and her story is well covered at the JP Historical Society web site. 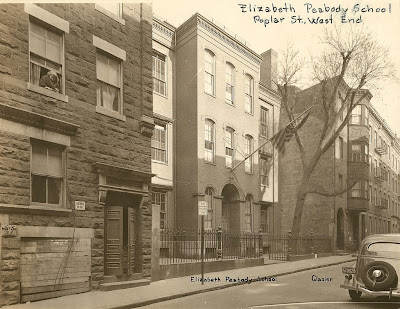 Another of Boston's Transcendentalists, Elizabeth Peabody opened a bookstore at her home, where Margaret Fuller's 'conversations' were held. She also led the movement, assisted by Pauline Agassiz Shaw, so establish kindergartens in this country. 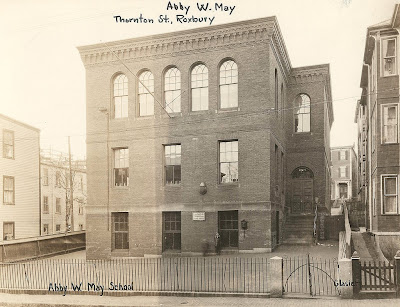 Miss Abbey W. May was one of four women elected to the Boston School Board in 1874. The matter had to to through the courts before they could be accepted in office, and in time their election was certified. 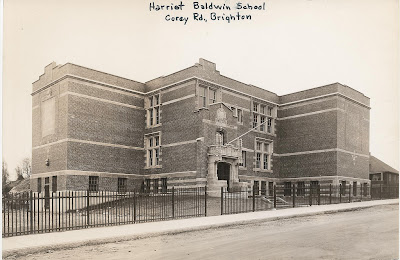 Harriet Hollis Baldwin was born in the town of Brighton in 1839. She was active in church and women's groups, and became an advocate for education when the town was annexed to Boston. She also advocated for the Horace Mann school for the deaf. 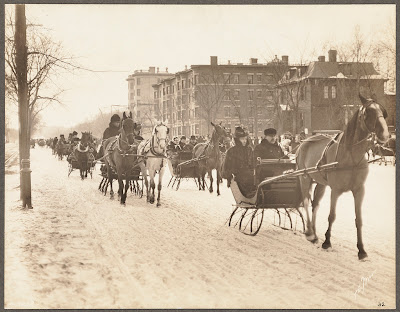 We're still waiting for our first real snow of the winter, but riding your carriage down Beacon street was a winter tradition for decades in Boston. As the old Mill Dam road laid out through the Back Bay when it actually was a bay, Beacon street was a straight shot out of Boston, and probably kept its snow surface in better shape that most in-city streets. It also took you away from the prying eyes of parents and their friends, so like the original South Boston bridge, I'm sure it was a favorite of young lovers
Posted by Mark B. at 10:00 AM 3 comments