The Guns of Boston Harbor 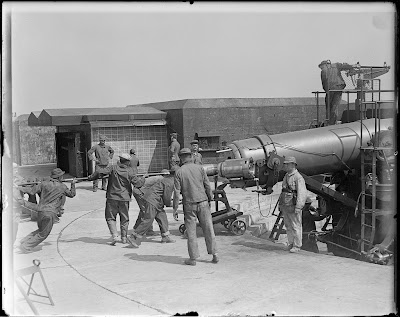 
A new series of photos was just released in the Boston Public Library Flickr photo group, including these images of the military batteries that once protected Boston Harbor. While Boston long had forts protecting the city, by the 1870s, they were obsolete. In the 1880s, the Presidential Endicott Commission recommended a dramatic expansion and modernization of America's coastal defense system. Between 1890 and 1910, earth and concrete batteries were constructed around Boston harbor, including the three shown here. They were manned during World Wars I and II, with most decommissioned during the Cold War. 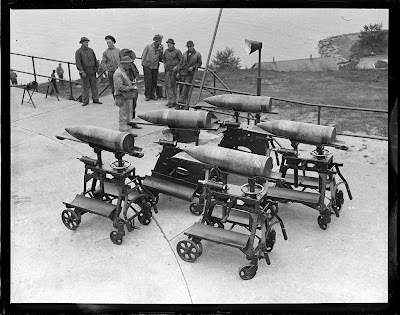 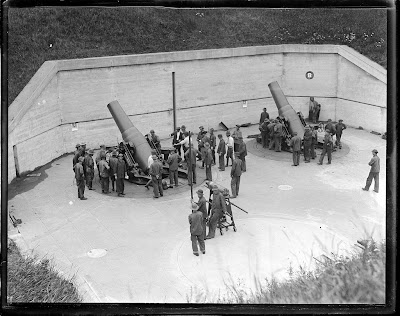 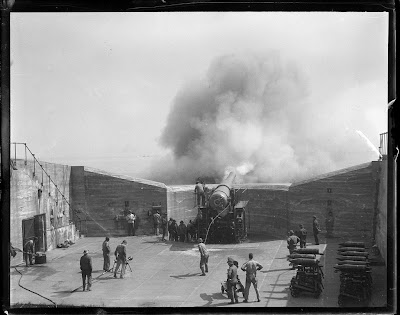 
For anyone interested in this subject, make sure you visit the Massachusetts Forts Wiki, which will tell you all you ever wanted to know.
Posted by Mark B. at 10:00 AM 2 comments 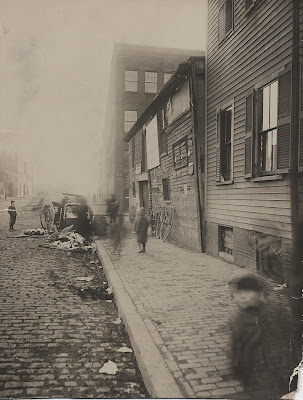 
The City of Boston has joined the Boston Public Library in posting images to a Flickr photo group, and every so often they post another group of photos or documents. The latest group is titled "Dilapidated and Demolished Boston," and includes building in various states of disrepair.

The photo above is one of two that shows the building that seems to lean out over the sidewalk, which was on the corner of Albany and Troy streets, in the New York streets section of the South End. I discussed the New York streets (which would later become the Boston Herald plant) in a post almost exactly a year ago, which can be seen here.

Back from the link? Good. The building on the corner of Troy and Albany street shown above contained a junk business at the time, and would soon be torn down. Most of the photos in this series are devoid of people, as if they didn't want a human presence spoiling the depressing scenes of broken windows and rotting wood. The picture above, however, includes spectral children, staring out at us from just shy of one hundred years ago. It is the figures of the children, blurred by movement, that make this the most interesting photograph of the group.
Posted by Mark B. at 10:00 AM 0 comments 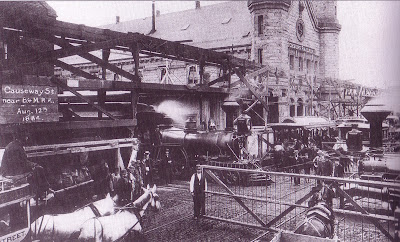 
I've had this photo on my hard drive long enough that I've lost track of where I found it. The stone building in the background is the Fitchburg Railroad Depot, featured in an earlier post. This is the site of today's North Station. I love this photo. Note the carriage or omnibus in the lower left corner, and what may be a horse-car down the street towards the Fitchburg Depot. Some kind of construction seems to be going on along the Depot side of the street (edit: this scaffolding was part of a bucket conveyor to move dirt for a sewer construction project) . And in the center, gates are being closed as two locomotives prepare to cross Causeway street on their way to and from the Boston and Maine depot at Haymarket square. 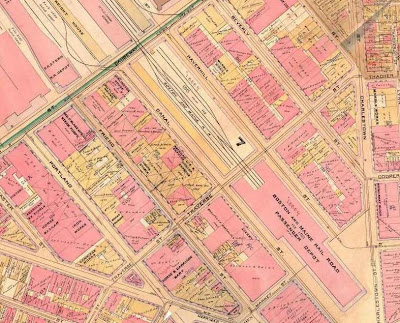 Boston and Maine Railroad depot at the point of the Bullfinch Triangle, 1888. Note how the depot is approached by crossing Causeway street at the upper left. 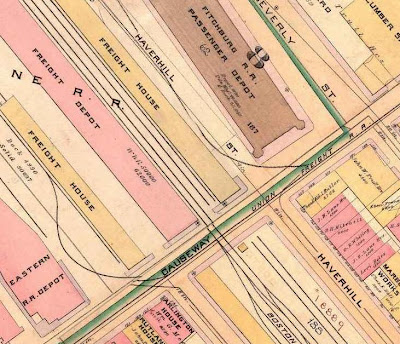 Closer view of the 1888 map above. The two railroad tracks cross Causeway street near the Fitchburg Depot.

Not clear from this map is that standard railroad tracks also ran right down Atlantic avenue and Causeway street, servicing various wharves and warehouses between the depots that connected with what we would call South and North stations. Imagine the traffic - horse teams stopped; freight wagons, carriages, horsecars and trains all competing for precedence or biding their time. We tend to think of traffic congestion as a recent problem, but the pre-automobile era certainly had its share.
Posted by Mark B. at 10:00 AM 0 comments