Advertisements from an 1878 Directory (thanks to Peter M. for sharing). 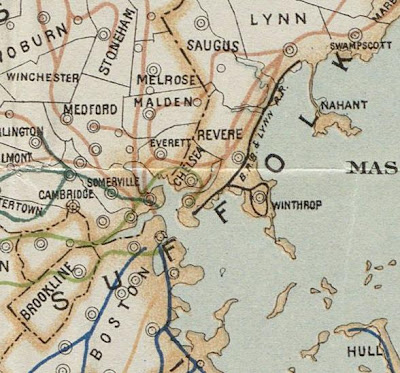 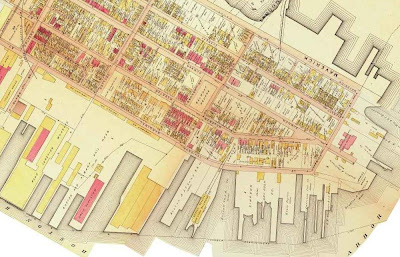 Boston Revere and Lynne depot, 1884. The depot is the small yellow (wood-frame) building on a wharf at the lower center of the map. The tracks were depressed, going under Marginal street as they came off the wharf.


Here's a railroad line you may not have heard of, unless you live between Boston and Lynn. The Boston Revere and Lynn line ran from East Boston to Lynn along the north shore. The line began operation in 1875, and ran until 1940. The line actually ran from Rowe's Wharf on the Boston waterfront, where a ferry would take passengers across the harbor to the company's East Boston railroad depot. From there, the line ran on narrow gauge tracks to Revere Beach and on to Lynn, with a loop line through Winthrop. 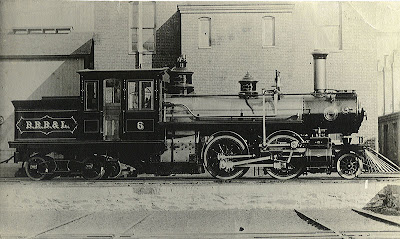 How cool is this? The Boston Revere Beach and Lynn locomotive #6. Made by Mason Bogie - great name.

The line was very successful. The seashore north of Boston attracted daytrippers, with so many passengers carried that the company was able to afford to electrify the line in 1928. The line was powered like streetcars, with an overhead pole connecting to the power line. Unfortunately for the company, this happened just as the automobile began attracting large numbers of travelers from trains. By 1940, the line would shut down. The track bed through Revere would later be used for the MBTA Blue Line. Some of the track bed that ran north through East Boston was taken for Logan airport, and the current Blue Line track meets the old railroad line north of the airport.

Some of the rolling stock was sold and remains in use by the East Broad Top Railroad in Pennsylvania, a heritage railroad. 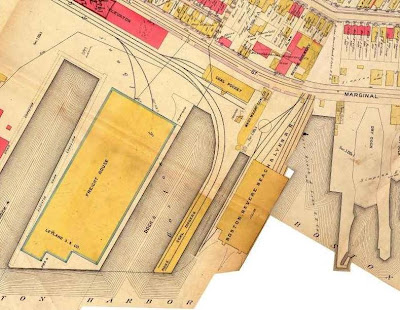 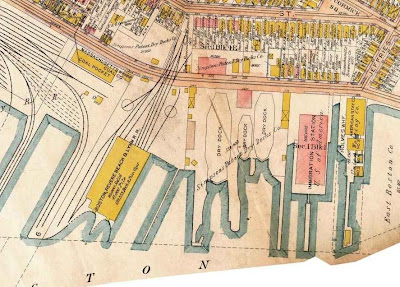 Boston Revere Beach and Lynn depot, 1922. This map shows the immigration center (pink, for red brick) to the right of the depot, beyond three dry docks.
Posted by Mark B. at 9:03 AM 7 comments 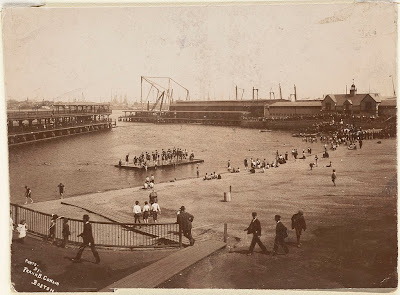 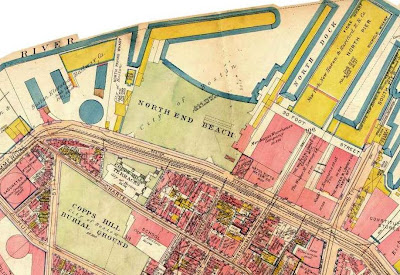 
The North End beach has been covered on other web sites, but it's just so cool I had to discuss it here. At the end of the 19th Century there was a push to build bath houses to provide a place for the working poor living in tenements (often without bathtubs) to clean themselves. Boston's bath houses will be the subject of another entry, but over time there was a shift to providing for exercise as well as cleaning facilities, and swimming pools and gymnasiums were constructed in large numbers.

Among the swimming facilities built were the shoreline bathhouses like the L Street Bath House in South Boston and the North End Beach, shown above. The North End beach sat in the middle of a working industrial marine district, and it didn't seem to bother anyone. The North End was Boston's first tenement slum, home to the Irish when they first arrived in large numbers during the Famine. By the time this facility was built, the Irish were gone, and Jews and Italians had taken their place. I doubt there was any water testing done at the time, and that's probably just as well.
Posted by Mark B. at 10:43 AM 7 comments 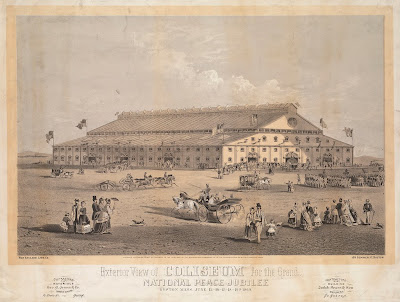 
You can't talk about post-Civil War Boston and not discuss the Peace Jubilee - so I will. The Peace Jubilee was organized by famed bandleader Patrick Sarsfield Gilmore, an Irish immigrant who was named 'the father of the American band' by the younger John Philip Sousa. After coming to Boston from Ireland, Gilmore played cornet in and lead some of the city's leading bands. During the Civil War, he enlisted as a musician, and while stationed in New Orleans was named bandmaster. During this time, he wrote When Johnny Comes Marching Home, which quickly became a classic.

Gilmore returned to Boston after the war, and in 1869 organized the first Peace Jubilee to raise money for the widows and orphans of the war. The Jubilee Coliseum was built to hold a stunning 30,000 audience members, an orchestra of 1,000, and a chorus of 10,000 singers. Famously, during Verdi's Il Trovatore, 100 Boston Firemen were engaged to strike anvils.

A second Peace Jubilee was organized soon after, this time to celebrate the end of the Franco-Prussian war. This time, the orchestra and chorus was doubled for the 18 day festival. Bands from France, England and Prussia performed, and Johann Strauss, the famous Waltz King attended and played a new waltz written for the event.


The coliseum was built on new land in the Back Bay while it was still being filled and streets laid out. The map above shows the structure right at where the Boston and Albany and Boston and Providence railroad lines met in what had once been the shallow bay. Today, the site is just south of the Back Bay railroad station. The photograph below, taken from an 1872 stereograph, shows the Boston and Providence line running parallel to the building.

A new building was to be built for the second Jubilee, but it burned down during construction, so the first Coliseum was rebuilt. 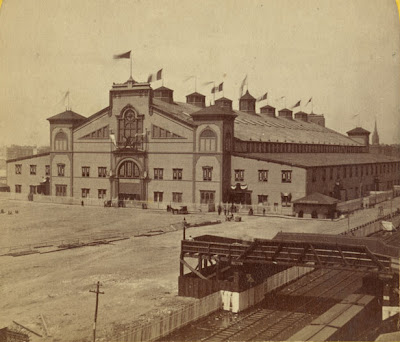 Over the back right of the building, we can see a church steeple - probably one of two churches on the first two blocks of Newbury street. Over the front left roof, two tall buildings stand in the far background. These were probably located on Beacon street, which as the Mill Dam road had been built upon before the rest of the Back Bay was filled. 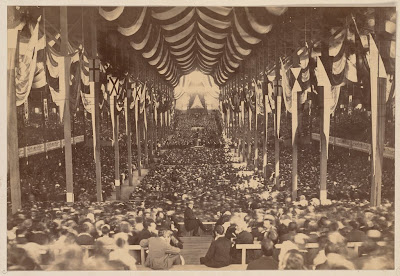 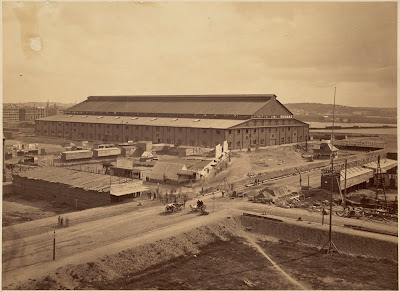 The photograph above is valuable in showing us what the Back Bay looked like during the time it was being filled. Note the raised roads crossing a lower ground level. This is how the entire Back Bay was filled. In order to keep costs down, the contracts that were signed to bring fill from Needham and elsewhere to fill the bay stipulated that the space between the future streets could be left filled lower than the streets themselves. This was because the construction of houses would require foundations be dug, so the house lots were filled to just above high water level, and foundations were build without digging. This saved the cost of a massive amount of gravel fill, and time as well. As houses were built, soil was brought in to fill around them as necessary.

The question is, where was this photograph taken from? I can't see any railroad tracks. In the right background, you can see water, and then hills. In the left background, there are buildings. I'll be damned if I can figure out where the camera was located.

Addendum: I just found this commemorative coin for sale on Ebay. It features Patrick Gilmore on one side and the Coliseum on the other.
Posted by Mark B. at 10:50 AM 9 comments 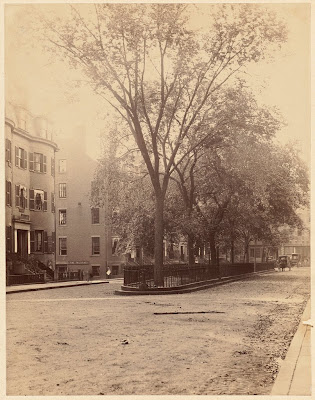 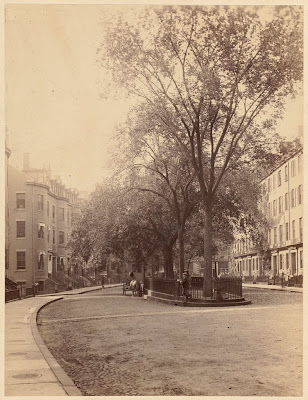 Once upon a time, there was a ridge of three hills overlooking the Boston peninsula. On top of the highest peak sat a beacon. The people of Boston were a lazy sort, and had no interest in climbing the hill, whether to maintain the beacon or anything else. One day, an old, and rather rotund citizen asked "If we don't like going up the hills (and we don't), then why don't we pull the hills down to us?" And so they did. 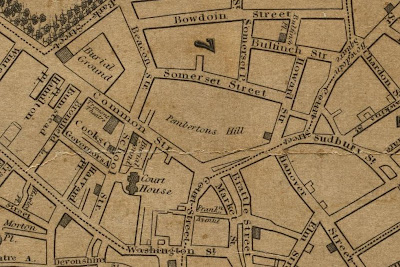 
It didn't happen quite like that, but in fact it did happen. What we now call Beacon Hill is now more of a hump than the hill it once was. And the three peaks were all shoveled away and carted off to fill the edges of the peninsula. One of the peaks, the one furthest to the east, was known as Cotton Hill in honor of an early settler. The land passed through many hands over its first 200 years, and as the town established its sea-going trade, it served as a residential estate, away from the busy commercial district near the wharves on the harbor-facing waterfront.

The 1829 map above shows the hill - then called Pemberton - surrounded by streets but still intact. The property was famous as the home of merchant Gardiner Greene and his terraced gardens, and for the view of the harbor from the estate. Greene made his money in Demerera (Guyana), and has appeared in this venue as an investor in South Boston land grab. 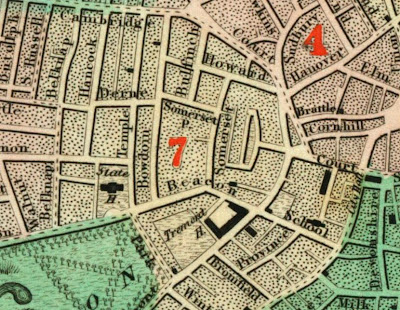 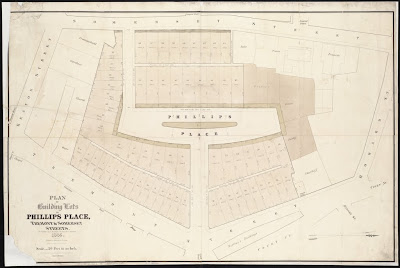 
Gardiner Greene died in 1832, and his estate and the other that made up the hill property were bought by Patrick Tracy Jackson. Jackson then hired Wilmington teamster Asa Sheldon to level the hill. Starting in May of 1835, Sheldon used 126 oxen and 250 men to remove 65 feet of elevation off the top of the hill. Of the work crew, 60 were Yankees and 190 Irishmen, with most of the Yankees being teamsters driving wagons, and all of the Irish manning shovels. In five months, the job would be finished and new plots laid out. 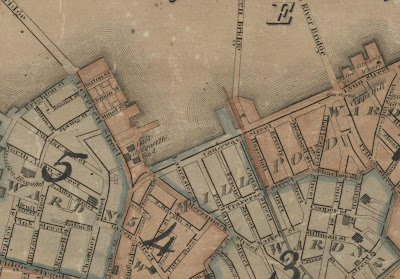 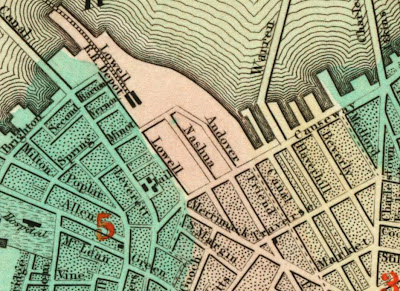 Bullfinch Triangle district 1838 (BPL). Note the addition of land above the top left corner of the triangle and the new Boston and Lowell train depot (shown in pink).


The two maps above show where the gravel fill was taken. Pemberton Hill had covered 4 acres, 2 1/2 of it owned by Gardiner Greene. The fill was moved by ox cart to the far side of Causeway street to create the land used for the new Boston and Lowell train depot, plus three new streets; Andover, Nashua and Lowell streets. The area covered was 8 acres, and the fill layer was 14 feet thick. 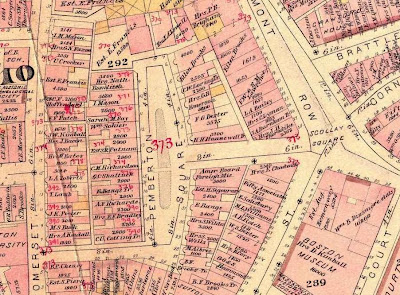 In this 1883 map, we see the final product; an enclosed central park, with housing all around, and two access roads. The development was similar to Louisburg square on the other side of Beacon Hill, and was home to a similar class of residents. 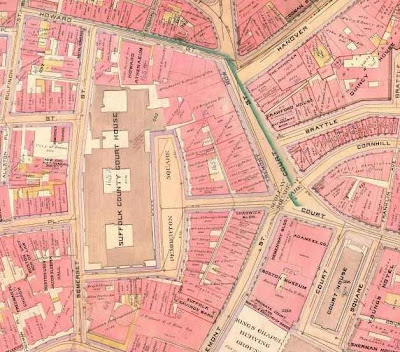 
The previous map caught the end of Pemberton square as an exclusive residential district. By 1888, the city had taken all the land along the Somerset street side of the park for a new courthouse (as shown below). With the coming of the courthouse, commercial use gradually took over in the square. Lawyers offices and law-related businesses moved in and residential owners moved out. Boston Police headquarters would also move in to one end of the square for a time. 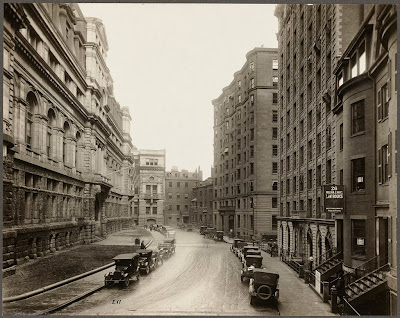 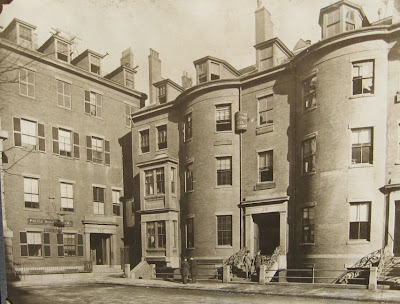 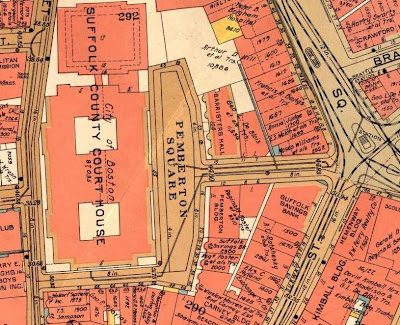 
In the 1920 photograph and 1938 map shown above, commercial buildings now line much of the square opposite the courthouse. Most of the original bow-front row houses are gone. The square survived until urban renewal took it in the 1950s/60s, and it was replaced by the Government Center project. The name, and the footprint of the park survive, with nothing but a plaque on the site to remind passers-by of the history of the once-proud site.


Source: Gaining Ground - A History of Landmaking in Boston.
Posted by Mark B. at 10:05 AM 5 comments