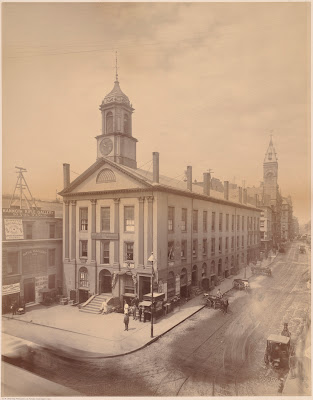 
Boylston Market was designed by Charles Bullfinch, erected in 1809-10, and named for philanthropist Ward Nicholas Boylston (Boylston street was so-named at the same time).

Note: The father of Ward Nicholas Boylston was the loyalist Captain Benjamin Hallowell, who lived in Jamaica Plain (then Roxbury). The Hallowells left Boston with General Howe in 1775. In time, the son, Ward Nicholas, took his uncle's surname, and returned from London to the United States in 1800 to fight for the return of the family property through his mother's line (his father being a loyalist). A magnanimous court returned the estate at Centre and Boylston streets in Jamaica Plain to him, and he remained there until he died in 1828. So Boylston street honors the son of a loyalist who returned and became a respected American. 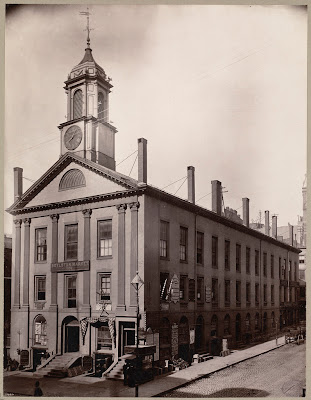 
More than just a market, Boylston market was home to various institutions, and housed a hall where concerts and meetings were held, including those of the Handel and Haydn Society and the New England Anti-Slavery Society. 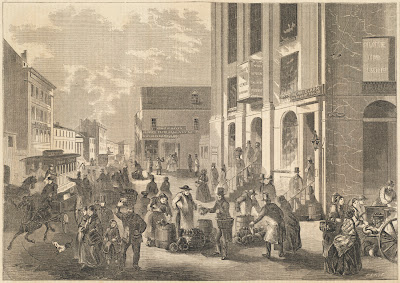 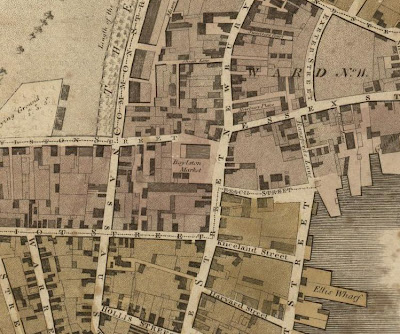 The then-new Boylston Market, 1813. At the corner of Boylston and Orange (later Washington) streets (click on map for larger image). 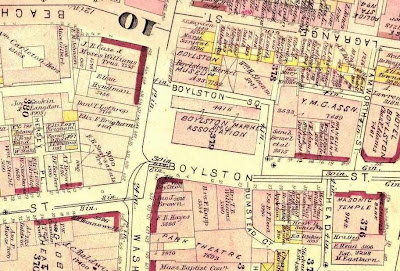 
Boylston Market was torn down in 1888, and replaced by the Continental Clothing House, which I discussed in my last entry. The belfry was eventually placed on the Calvary Methodist Church in Arlington Massachusetts.
Posted by Mark B. at 10:00 AM 4 comments 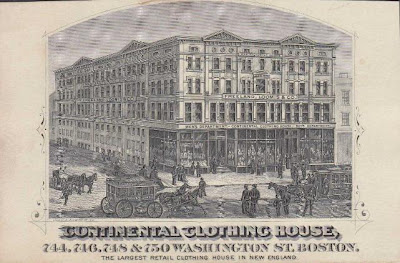 
The Continental Clothing House, or Freeland, Loomis and Company, was founded in 1873. The store was preceded by the C.W. Freeland, Beard and Company, located at 152 Devonshire street, as revealed by the 1865 Boston Directory. At the same time, Silas Loomis was having success in business in in the Midwest. After the Chicago Fire of 1871, Loomis came to Boston and joined the firm Freeland, Loomis and Company. The first location of the new store was 744-756 Washington street. This was at the corner of Harvard street, which was one block south of Kneeland street. The contemporaneous print above boasts "The Largest Retail Clothing House in New England."

"King's Handbook of Boston said: "The first place of business in this country to make use of the electric light was the Continental Clothing House, at the south-west corner of Washington and Harvard Streets ; the proprietors, Freeland, Loomis, & Co., successfully making the experiment Nov. 14, 1878. In 1881 the light was introduced in illuminating Scollay Square and a section of Court Street at night; and it was also employed in a number of hotels, shops, and large establishments. Its general introduction in the street-lighting of the city has since been carried forward. " 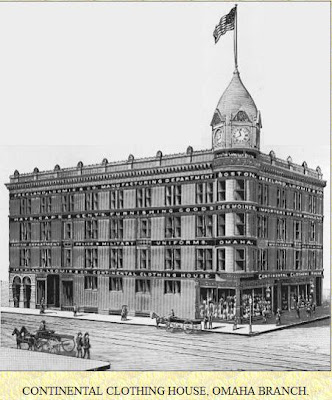 Before I go on to the second location of the Continental Clothing House in Boston, this might be the appropriate place to insert mention of the Omaha branch store. Presumably based on Silas Loomis' experience in the West, the Omaha Illustrated of 1888 reported: "The proprietors of the establishment have fixed upon Omaha as the most important point for the western distributing branch of their business, and will eventually transfer a large portion of their manufacturing to this city, where, in the near future, it is proposed to enter into competition with the large western wholesale markets of Chicago and St. Louis in supplying the demand of the great West and Northwest, which must look to Omaha for its supplies of every description."

Evidently, Freeland and Loomis were thinking big. The Omaha Illustrated article also informs us that the stock for the store would be manufactured in Boston by between by "between five and six hundred hands," at the home facility. That's interesting. I take from that reference that the stock sold at the Boston store had been made on the premises as well. 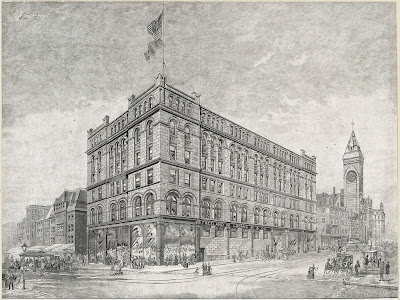 The new building, at the corner of Boylston and Washington streets. 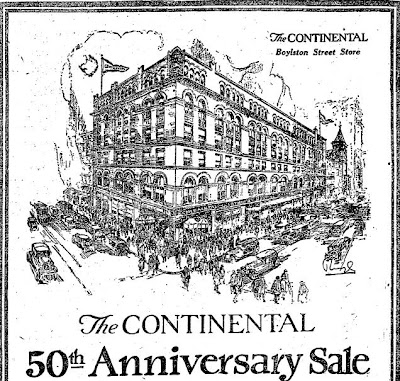 From an advertisement, Boston Globe, December 7, 1923.

Back to Boston. In 1888, the store moved up Washington street to the corner of Boylston street, on the site of the old Boylston Market (more on that building in a future entry).

Advertisement from The Tech, newspaper of the Massachusetts Institute of Technology, December 10, 1896. 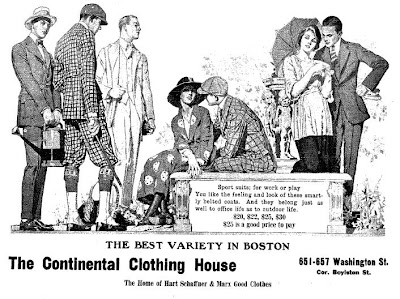 Another advertisement from The Tech, the newspaper of the Massachusetts Institute of Technology, March 30, 1917. Stylish, aren't they? 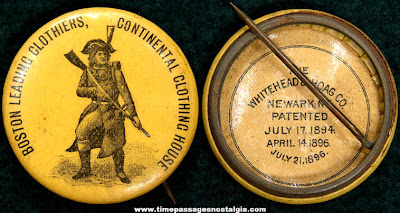 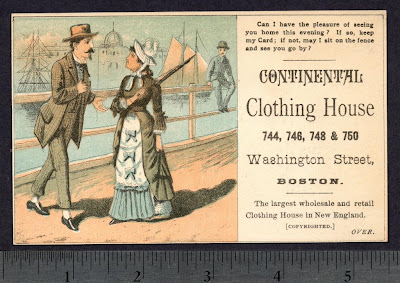 The trade card for the Continental Clothing House shows, on opposite sides (above and below) the difference between your average suitor and the well dressed man. 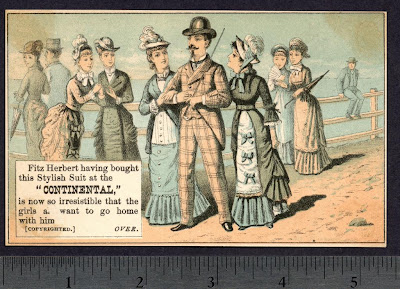 On September 7, 1923, a Boston Globe article announced that the Continental Clothing House, under the name Freeland Loomis Company, had been bought by William Filene's Sons Company. Both the main Boylston street store and a newer store at Washington and Franklin streets were included in the sale. So now we know what happened to this major Boston retail institution. At least we know what happened to the name. I still don't know what Filene's did with the Boylston street location, and how long it remained as a retail establishment.
Posted by Mark B. at 12:47 AM 6 comments 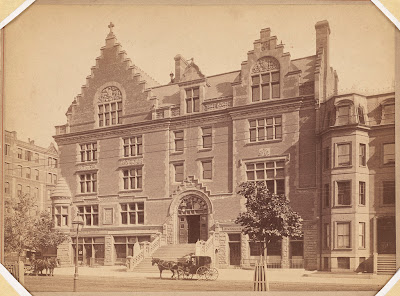 The Young Men's Christian Association was founded in London in 1844, with the first American chapter opened in Boston in 1851. It was led by evangelical Christians, and intended to serve young men new to the city, and keep them on the straight and narrow. The organization went through several homes as it grew, ending up at the corner of Boylston and Berkeley streets in the Back Bay. The 1883 map below shows the location, opposite the Museum of Natural History and the Massachusetts Institute of Technology. Men could find housing, read in the library, attend lectures, take classes and exercise. This was part of the 'muscular Christianity' movement of the time. 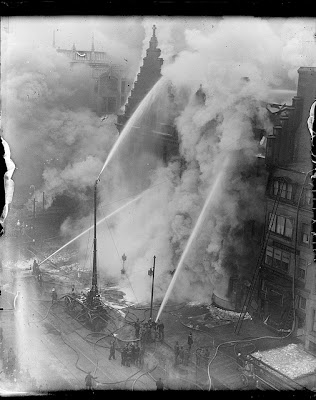 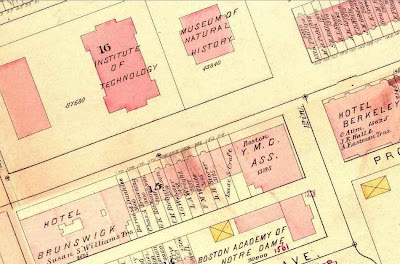 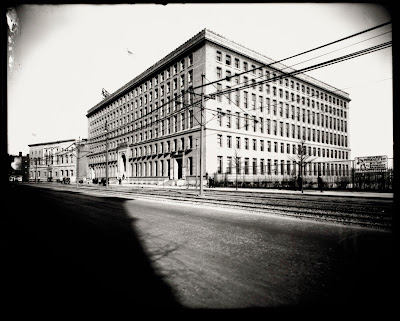 
The organization would move from Berkeley street to Huntington avenue, where the Opera House sat on the opposite corner, the New England Conservatory and the new Museum of Fine Arts building was just up the street. 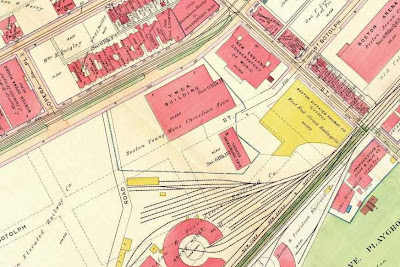 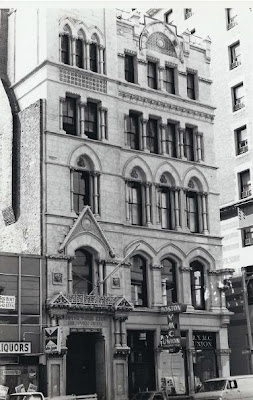 The YMCU was, like the YMCA, founded in 1851. So why two young men's Christian organizations at the same time? Wikipedia claims that Unitarians were excluded from the Evangelical YMCA (without citation, as usual). It was a group from Harvard that established the YMCU, and Harvard was primarily Unitarian at the time, so this would make sense. The building was designed by Nathaniel J. Bradlee, who was both a leading architect at the time and a life member of the organization. The 1883 map below shows the L-shaped wing in the back. The photo above does not show the long-lost clock tower that was situated at the top of the left section of the facade. The UMCU matched the YMCA in offering classes, a library, exercise facilities and the rest. 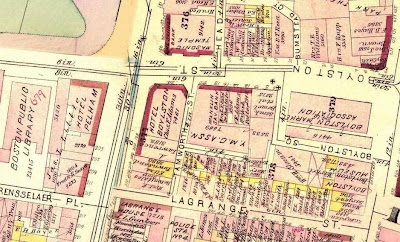 Young Men's Christian Union, on Boylston street between Washington and Tremont streets, 1883.
Posted by Mark B. at 6:50 PM 3 comments