Simon and Aaron Willard were born in Grafton Massachusetts in the mid 18th century. They apprenticed as clock makers, and in 1780 came to live and work in Roxbury. Within ten years, Aaron would move his shop to Boston, but Simon stayed in Roxbury Simon's shop was on what is now Washington street (then the only road running across Boston Neck to Roxbury) near Eustis street. While Aaron is considered the lesser craftsman, he was the superior businessman, surrounded by a clockmaking colony around his Washington street shop, and retiring a well to do man. 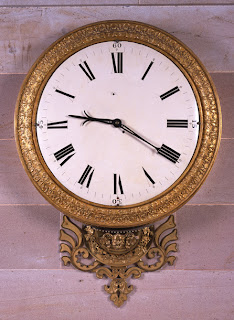 
In Roxbury, Simon Willard's clock-making process also involved farming out work to surrounding shops. Simon himself made the cockworks. There would have been painters and engravers, and cases were made by various local craftsmen For a time after the Revolution when metal was dear, they actually imported British clockworks and put them into their own wood boxes. Simon would make clocks during the winter, and travel up the north shore of Massachusetts to peddle them, sometimes going as far as Maine.

During their early years, the Willards built the standard tall clock - what we would call a grandfather clock. In 1801, Simon Willard invented the so-called banjo clock. This smaller clock, with its short pendulum, could be hung from a wall or put on a mantle.This made clock-owning available to many more people. The design was patented, with the help of Thomas Jefferson, who Willard met while  working in the capital, but Simon Willard did not fight to protect his patent, and many other clockmakers copied and profited from his design.Willard became Keeper of the Clocks at Harvard, and made clocks for the Old South Church and the Capitol building in Washington D.C., as well as the famous Supreme Court clock shown above. He retired in 1839, and lived with various sons and daughters until he died in 1848 at ninety six years old. 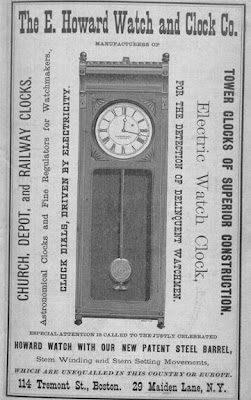 Advertisement for an E. Howard clock. As was traditional for the time, the Roxbury factory address is not given. Most such businesses had sales offices in Boston, and used their downtown address. This can cause confusion for the amateur historian. 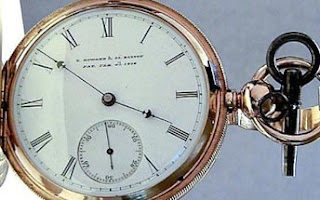 
Edward Howard, born 1813, apprenticed with Aaron Willard Jr in Roxbury. Starting in 1842 with a partner, the Howard and Davis company built high quality wall clocks, along with precision balances, sewing machines and fire engines(!). A factory was built in Roxbury in 1845. The company evolved over the years, with different partners and various reorganizations. Davis left, Howard Clock and Watch failed and became Howard Watch and Clock. The company had only two standard models, but made many others to order. They made regulator wall clocks and watchman's clocks for business, and tower clocks for buildings. The clock at South Station was made by E.Howard. During the late 19th century, their watches were among the best made in the country. 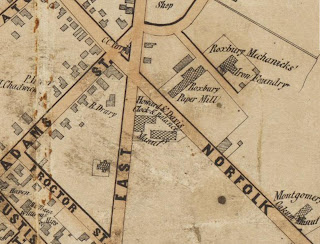 Howard and Davis Clock and Balance mfg., Hampden (East on this map) and Norfolk streets, Roxbury, 1852. They would later move across Hampden street to where Proctor street is on this map. Howard street would be laid out parallel to Norfolk street and just behind the Howard factory in 1859. 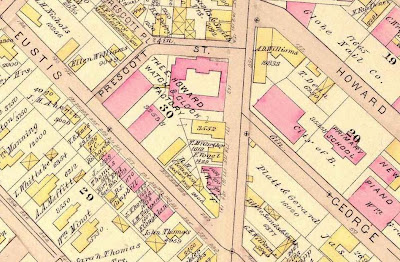 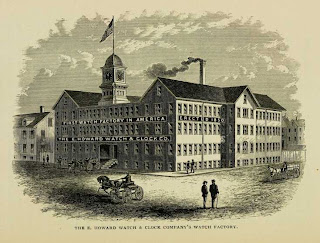 
Howard watches were among the finest in the nation. Edward Howard developed the stem wind watch, doing away with the need of key winding. Howard retired in 1881, with the business going on under his name. The watch business was sold in the early years of the 20th century, and manufacturing was moved to Waltham. It is claimed that the  Howard company remained in business in Roxbury until the 1930s, but the company was sold to Hamilton Watch company in 1927. The company name does show up on a 1931 map, so someone doing business as the E. Howard Clock Co. on Eustis street at the time.

So for a century, Roxbury was the home to some of the finest horological craftsmen and elite brands in the nation.

The Willards and their Clocks

Let's Go To The Races! 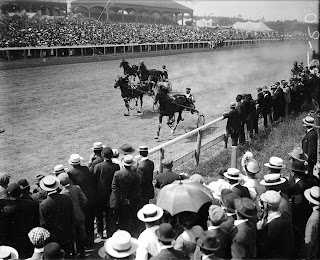 
It's been a while since I posted. That's because I've suffered from a 'new improved!' version of Google Blogger. As with  other  social media software, Google has managed to scramble what was a perfectly good system, for no benefit that I can see. I won't bore you with the details, but the difficulties of learning the new layout have been great enough to make me walk away from the effort for many weeks. That being said.... back to Boston history.

Many people are familiar with Suffolk Down racetrack in East Boston. Fewer know that there was once a track in Readville at the southern tip of the city. The track, once cite of the civil war training Camp Meigs, famous for its role in the  history of  the black 54th Massachusetts Regiment. After the war, it became home to an agricultural fairground in the then-new town of Hyde Park. With the fair came horse racing, and the racing stayed after the fairground closed. 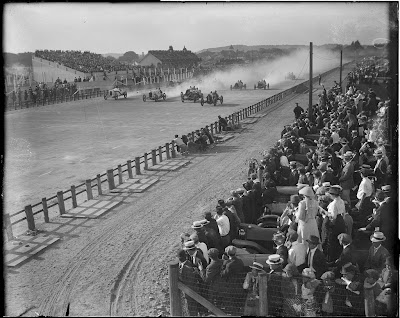 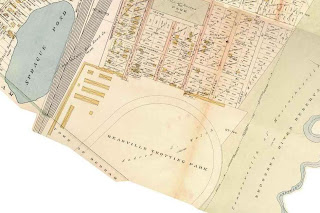 The Readville track, at the Boston/Dedham border, 1918.


.
In 1896, a new mile-long trotting track opened, with grandstands and a hotel. With a new century came a new form of transportation, and the first thing men did with automobiles was to race them.Trotters and automobiles shared the track. By the early 1930s, a new track had been laid, and cars were king. Nineteen thirty-seven saw the last official race, and during the war years, military pilots used the track to practice landings. 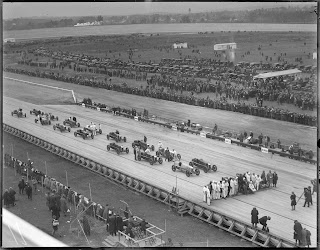 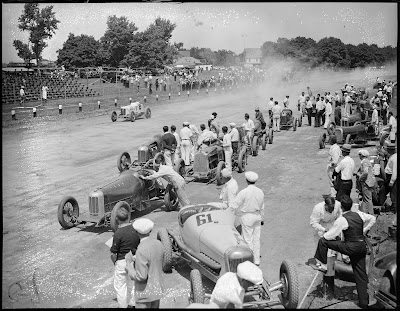 Stop and Shop built a large distribution warehouse on the site along the railroad tracks, which sits empty today, waiting for redevelopment. As a final, threatened indignity, the town of Dedham once considered their strip of land at the site (much of it wetlands) as a dedicated 'adult' business district. The effort was, of course, an effort to scam their way out of Constitutional requirements, and wiser heads prevailed.