The Back Bay Stables 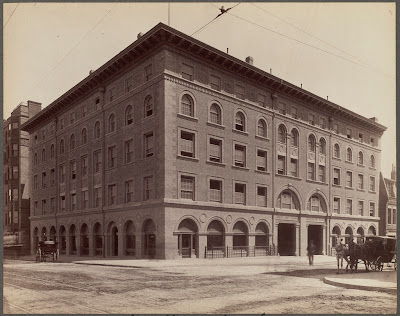 Newbury street, 1883. Notice the 'X' marks through the buildings on both sides of Newbury street (click image for larger view). 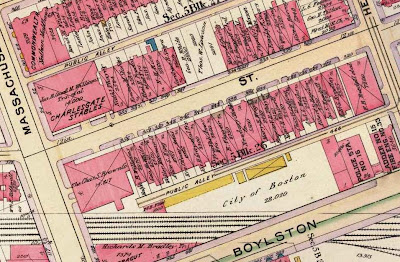 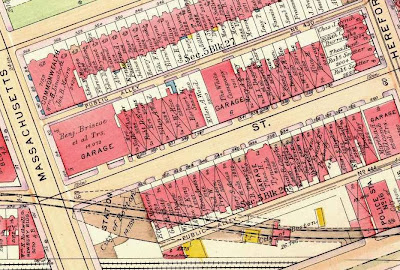 Newbury street, 1917. Notice that the large commercial stable on the corner of Newbury street and Massachusetts avenue, as well as three smaller facilities, are now automobile garages. The residents of the Back Bay were exactly the kind of people who could afford cars, and would need a place to park them.

When I was in school, we were taught the wars-kings-generals-presidents school of history. While I think it's a perfectly legitimate approach for a big-picture understanding of the past, when it comes to local history I very much prefer the every day life aspects of history. What kind of jobs did people do, how did they get about, what was in the shops, these all interest me far more than who the politicians were and what they did. While this blog could be sub-titled 'Lost Buildings, Institutions, and other such Stuff,' I thought I'd take this opportunity to do a double.
The maps above do show old buildings (or at least their locations). But what I am interested in is what the buildings were used for. In this case, I'm interested particularly in the building on Newbury street between Hereford street and West Chester Park, later Massachusetts avenue. Please note that there are 'X' marks through each of the buildings on this block. These maps were created by the fire insurance industry, as an aid for determining the risk, and coverage cost, of each property. The 'X' drawn from corner to corner of a building was used to signify the storage of hay for horses, and thus a high fire risk.
Here, the buildings have led me back to my interest in every day life. Although it had never occurred to me, of course during the 19th Century a district of wealth like the Back Bay would require stables for the horses and carriages of the residents. And with all those residences, where would the horses and carriages be kept? Now I know; this single stretch of Newbury street was used to stable the horses and carriages of Boston's Back Bay residents.
We know that there were no other stables in the Back Bay because of the lack of 'X' marks on any other buildings in the district. The Newbury street block housed both private and commercial stables. We know that this block was designated (unofficially, perhaps) for stables because the stables show up here and only here on the 1883 map, in spite of their being many open plots to build on south of Dartmouth street. The property of the Back Bay residential district was considered too valuable to be wasted on stables, and the smell, noise and fire threat of stables would only disturb the finer senses of the Yankee stock that was moving in to the district. This block was as far as you could go without leaving the planned district, as just south, the Fenway drained Muddy river and Stony brook into the Charles, and the rectilinear street pattern broke down.
I'm reading: The Back Bay StablesTweet this! Posted by Mark B. at 10:00 AM