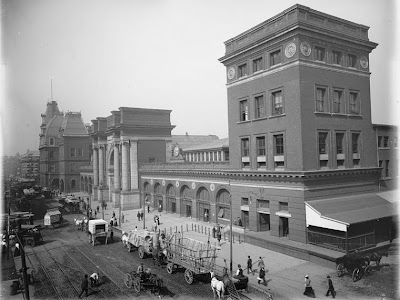 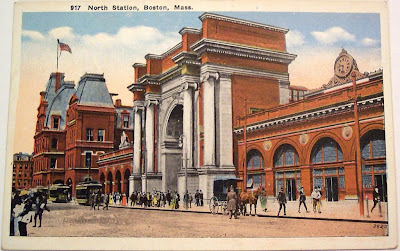 The original North Station, Causeway street. The old Boston and Lowell depot with its Mansard roofs remains to the left of the new buildings. 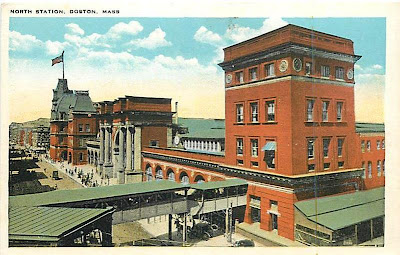 Heres' a later view, showing a walkway from the elevated line.

It's taken a while, but I've finally returned to discuss North Union and North Stations. The original station, shown above, combined the old Lowell station with two adjoining buildings to serve traffic from north of Boston and that coming through the Hoosac Tunnel through western Massachusetts. It was built by adding new structures to the existing 1878 Lowell depot in 1893. By this time, most traffic was under the control of the Boston and Maine line. Just as South Station combined traffic that once was served by independent depots, the new North station was a union of formerly independently operating depots in one facility. 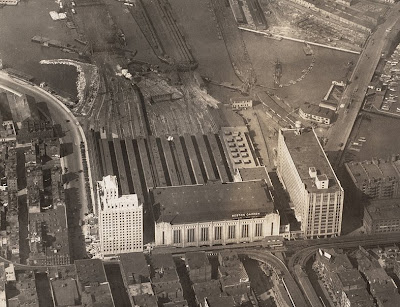 Aerial view of the new North Station, with Boston Garden. Also note the elevated tracks in the foreground (BPL).
In 1927-28, the entire edifice was torn down and replaced with a new North Station. Both an elevated line and streetcars connected with the new location, and Boston Garden was built on top of the station. The Hotel Manger was added adjacent to the station in 1930, and was later renamed the Madison. 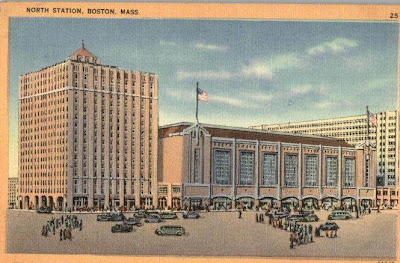 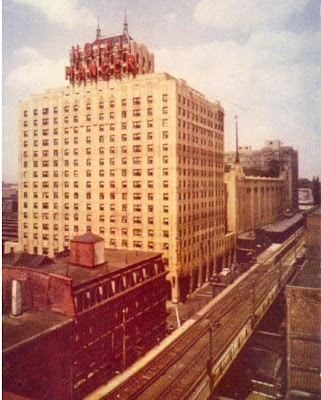 And finally, a more realistic view, featuring the Hotel Manger, later re-named the Madison. Note the elevated line leading to Charlestown.
I'm reading: Lost Train Stations: North Station - I and IITweet this! Posted by Mark B. at 10:00 AM