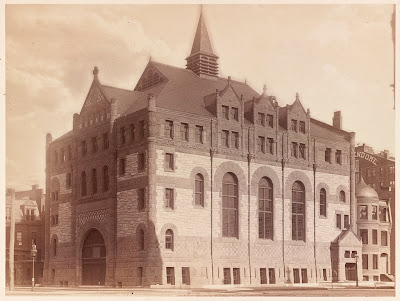 
Spiritualism stands in an odd place in American culture. When considered at all, it generally gets associated with Ouija boards and Hollywood seance scenes from 1930s-40s movies. Beyond that, you might have seen reference to Harry Houdini debunking spiritualists and psychics. This is actually a shame, because there is much more to the story of Spiritualism than 20th Century frauds and fiction plot devices.

The subject of Spiritualism is beyond the scope of this blog, but I would encourage anyone interested to dig in and read up on this fascinating topic. Here, I'll just give a taste of the subject. Spiritualism began in New York during the 1840s, in what was known as the 'burned over district.' In an atmosphere of religious ferment, people began to contact spirits of the dead, through table rapping, and later direct communication with mediums. In time there would be levitating trumpets and 'spirit closets,' but there was much more to Spiritualism than illusions and tricks

Spiritualist meetings hosted some of the very first public speeches made by women in the United States. With no male hierarchy, Spiritualism allowed women the opportunity to take leadership roles in public for the first time. Spiritualism became closely associated with women's suffrage and abolitionism in the years before the Civil War. Many of the earliest leaders of what we would consider the women's rights movement were also Spiritualists.

Over time, interest in Spiritualism waned. The Civil War and exposure of fraudulent mediums both lessened interest in the subject. Eventually Spiritualism was seen more as a parlor game than a religion, but interest did remain at a lesser level. While a lack of hierarchy was once a virtue and attraction for Spiritualism, organized churches did come about. The photo above shows one of them.

The first Spiritual Temple was built on Exeter street at Newbury street. Built in 1885, it had a short life in its intended purpose, and by 1915 it was transformed into a movie theatre. The Exeter Theatre was a favorite Boston movie house until 1974,* when declining attendance caused it to quietly shut down. It has had multiple tenants since then. Surprisingly, the Spiritualist church society did not sell the building at the time the theatre opened. The group is apparently still active, and their web site informs us that they were the operators of the cinema through all those years. There's an interesting story to be told there, no doubt.

Email ThisBlogThis!Share to TwitterShare to FacebookShare to Pinterest
Labels: Churches