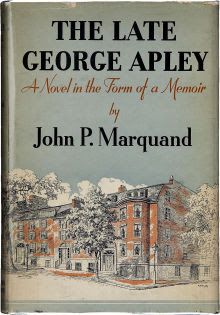 I'm taking a break from history books and picture books and map books to recommend a novel. The Late George Apley, subtitled A Novel in the Form of a Memoir, was written by John P. Marquand in 1937. The narrator has been asked to write the memoir by the son of the late Mr. Apley, and he does so using letters and other documents, and occasionally his own memories.

The Late George Apley is known as a picture of Brahmin Boston, but it was written at a time when the specific Boston Brahmin species barely existed any more - the suburbs and events having taken and overtaken them. We see Yankee Boston through the lens of a man already dead, his father, his grandfather, and the collective past of a parochial society.

What this book is not is an anthropological study of Protestant Victorian Boston. It is the study of a man's life - a man who happened to live in a particular place at a particular time. More than anything else, this is a story of how a man deals with middle age and mortality. The Late George Apley is as much the story of the end of the Boston Brahmins than of their lives. This is does with a subtle humor that retains a respect for its subjects.

Marquand was raised in Newburyport, attended Harvard, and worked as a reporter for the Boston Evening Transcript. He is probably best known today for his Mr Moto novels, but he won a Pulitzer prize for Apley, and was considered one of the best American writers of his time. All of his 'serious' novels fell out of print for a time - and lost their critical acclaim - probably due to his success as a popular writer. Where else but in criticism does popular success lead to distaste?
I'm reading: Book Club: The Late George ApleyTweet this! Posted by Mark B. at 12:00 PM