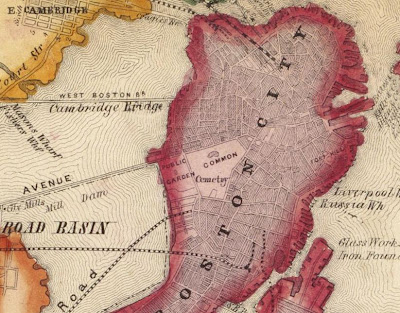 
This is the start of a series I'll be doing on the lost train stations of Boston. The general layout of Boston's railroad lines today is much similar to what we see in the 1853 map shown above. Here we see the very beginning of the great Back Bay fill project. The Public Garden has been extended into the Charles river estuary over land that had formerly been used as rope walks (rope-maker's buildings). The two dotted lines that cross near the word BASIN are the Boston and Providence and Boston and Worcester lines, built on solid fill and on trestles across the shallow waters of the bay.

The Boston and Providence line came through Roxbury and across the bay to today's Park square (from the lower left corner of the map up towards the upper right). The company was chartered in 1831, and began running in 1834. Bostonians had long traveled by land to Providence before transferring to a ship for the trip to New York City, and this was true until a rail line connected Providence to New York. The sea route from Boston to New York City was a sailor's nightmare, with shoals off the outer Cape and Nantucket making the area a graveyard of ships. Thus, the Boston to Providence route served to cut the danger of such travel.

When originally built, the line ran north across the back bay waters, and in to the city just enough to build a station. As the Back Bay district was filled during the second half of the 19th Century, this left the station at Park square in the middle of the city, rather than at its edge.

Here we see the old station at Park square, with the Public Garden and the new Boylston street filled with buildings. The original station, shown here, was removed and a new one built slightly to the south to allow the new Columbus avenue to reach Park square. This Park square location allowed commuters from south of the city to walk or take carriages to work, making suburban living possible for not just the retired well-to-do, but for active working men as well. And of course, their wives could visit Boston shops, and both could avail themselves of the cultural advantages of the city. It was the railroads that allowed the first great exodus from the cities, not the automobile. 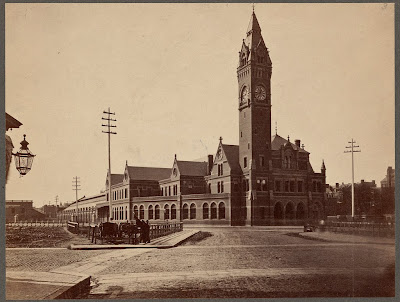 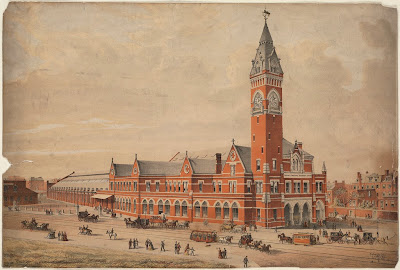 The photo and print above show a large Victorian station with a tower at Park square. This building was erected in 1874. The street cutting across the building at an acute angle is Columbus avenue. 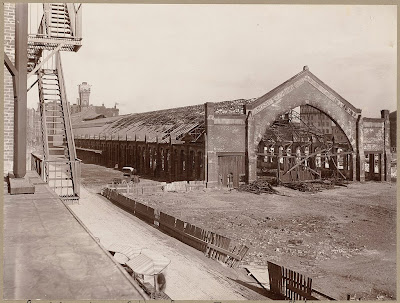 The Park square station being torn down. (BPL).


Here we see the station after it had been replaced in 1899. The Providence line terminus had been moved to South Station. If you look at the map above, the spot where the two railroad lines crossed in the Back Bay was now filled and built upon, and was made home to the new Back Bay station. Here, the Providence line turned to join the old path of the Boston Albany line to the new South Station terminal. So when you stand in front of the Back Bay station today, you can imagine yourself in the middle of the shallow bay, standing on the trestle where the two lines once crossed.
I'm reading: Lost Train Stations: Boston and Providence RRTweet this! Posted by Mark B. at 9:39 PM