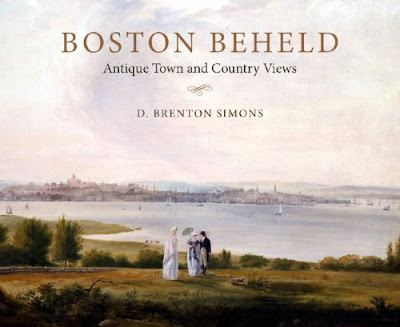 This book, subtitled Antique Town and Country Views, is by D. Brenton Simons. It is a lovely collection of 18th and 19th Century paintings of Boston and environs, many unavailable in the other Boston picture books I've looked at recently. As much as I love 19th Century photographs of buildings and street scenes, there's something about color paintings, even when less than 'photographic,' that bring the past to life. There are idyllic panoramas of Boston from Roxbury, the harbor and islands, and streets lined with houses that disappeared under commercial buildings. You get to see shops, the clothing people wore, the carts and wagons that filled the streets, and even fires that brought grand buildings down.

Each painting is dated, and descriptive passages help us relate the scene to the present. Page by page, the viewer is given the opportunity to go back in time, and stand at a particular corner, or on a particular hill and see the city as contemporary residents and travelers did. So much that is shown is gone now, but then it had to go to build the modern Boston we know now. Gardiner Greenes's grand mansion and terraced gardens, which we see in two paintings, stood on a hill that no longer exists, and was replaced with Pemberton square, which itself was torn down to build a courthouse on the side of Beacon Hill.

Definitely get a hold of this book to see the Boston that predated photography - it's a gem.
I'm reading: Book Club: Boston BeheldTweet this! Posted by Mark B. at 8:43 AM