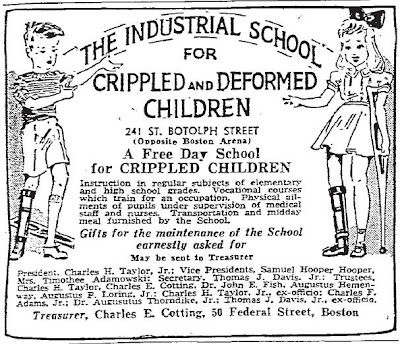 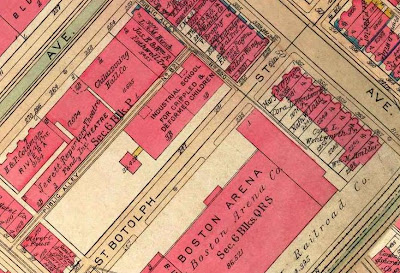 
Founded in 1893, the Industrial School for Crippled and Deformed Children was located on St Botolph street opposite the Boston Arena (the Arena was built just after the school). The school was founded by two orthopedic surgeons from Boston's Children's Hospital who were concerned about the educational opportunities available at the time for the children they served. If you click on the map for a larger image, you will see that the building is in two parts. The original school is the smaller of the two sections to the upper right. In 1923, the institution added the larger building on the left, which included a high school and other facilities. The school was still at the site in the 1980s, when they finally moved to Lexington under the name the Cotting School.

It was the name of the school that caught my eye while I was scanning through maps to locate another institution for an earlier post. It brought to mind the fact that during the first great surge of Boston's philanthropic efforts, the language used to name the resulting institutions was often quite direct. These people, who did so much for those they served, saw no need for euphemism, presumably because they saw no fault with the words they used. They followed the practice of the past - the insane of the city were sent to the Insane Hospital. I point this out not to deny the value of the name changes we've seen in recent decades for various handicaps and conditions, but to suggest that those who created the original names were no less virtuous than ourselves. We get the most out of history when we seek to understand, not judge.
I'm reading: Industrial School for Crippled and Deformed ChildrenTweet this! Posted by Mark B. at 4:22 AM