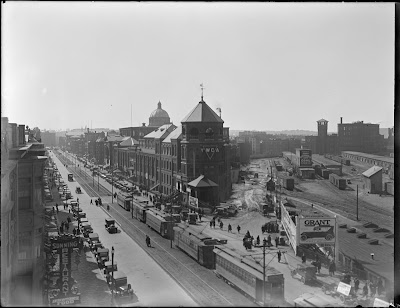 Looking south down Huntington avenue. The dome of the Christian Science Mother Church can be seen in the background, the Boston and Albany railroad yards to the right, and the tower of Mechanic Arts High School in the right background (BPL Flickr group). 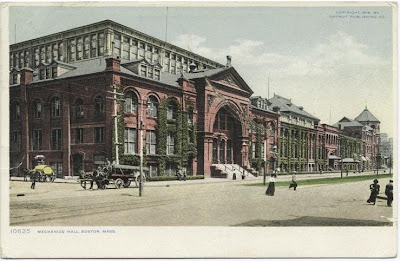 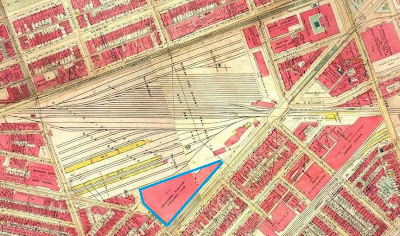 On this 1928 map, Mechanic's Hall is marked in blue. The Boston and Albany train yards sit between Boylston street and Huntington avenue, and Copley square and the Public Library are at the upper left.

Mechanics Hall was erected in 1881, and sat between Huntington avenue and the Boston and Albany railroad yards. The Massachusetts Charitable Mechanics Association was founded in 1795, the founding members including Paul Revere. The goal of the Association was to encourage the mechanic arts, and the founding members included hatters, bakers, coopers, printers, goldsmiths, and just about every other craft and professional skill. The organization sponsored exhibitions, gave to charitable causes, and collected a library. Their first building was at Bedford and Chauncey street, and they moved to Huntington avenue in 1881.

Mechanics Hall was the convention center of its day, with exhibitions of furnaces and other industrial goods, sporting events, and concerts, including the Original Dixieland Jazz Band. In 1959 it was taken down for the Prudential Center complex.
I'm reading: Mechanic's HallTweet this! Posted by Mark B. at 5:08 AM